31 August is considered the holiday of Solidarity (NZSS Solidarność) and the Gdańsk Accord signed on that day its founding act. However, the shape of the union was being ‘forged’ throughout the following several days. In August, there was no talk of a Polish nationwide organisation and a path towards it turned out a winding one. The uncertainty as to the possibility of setting up independent unions in the country’s other regions led to a new wave of strikes: in September they involved at least 650 plants and 350,000 persons.

That month (11 September), the ‘Katowice accord’ was also concluded in Dąbrowa Górnicza, its key provision being a guarantee to implement the Gdańsk Accord as regards the establishment of structures for independent unions in other regions of the country. Open remained the question as to their shape and organisation – whether that would be a series of separate unions or a single all-Poland one and what their (its) (industrial or territorial) structure would be.

Ultimately, a single Polish nationwide union was set up based on territorial division. That required braking the resistance of both Gdańsk activists and some union advisers (e.g. Jacek Kuroń). Several years later, Andrzej Gwiazda explained his approach in the following words: We already had some experience of strike committees being set up in some plants: on bent legs, practically appointed by the management. We feared that apart from two or three locations where pre-August opposition was present the other Inter-factory Founding Committees (IFCs) could consist of figureheads, simply security agents. Then agreeing to have a single union, we allow for decision-taking by a body where 85% members may be agents. To the contrary, in a loose federal structure we would retain the important role of Gdańsk and it would be obvious that the rest of the country would follow. For his part, Bogdan Borusewicz recalled: We were working on our statute assuming that each region would register separately […] I and my colleagues were decidedly against establishing a management body at the central level. The advisers were also against that. The Head of the Committee of Experts at the Inter-factory Strike Committee in Gdańsk Tadeusz Mazowiecki explained why: That was not submissiveness or fear of those in power […] We thought that in order to effectively face the totalitarian, monopolistic authorities one should juxtapose them with something not equally monolithic, but very democratic, something principally different from them. And a highly federal structure meets that condition. Then Kuroń – an informal adviser to the IFC in Gdańsk – remembered: My idea for a works council had been already accepted and now the point was how the union was to function. Everybody agreed that it should be just a control body in a given plant and have a regional structure as well as some reconciliation instance between the regions. Nothing more. No headquarters.

Two persons, Karol Modzelewski and Jan Olszewski, were instrumental in changing that mistaken approach and breaking the resistance, which proved unfounded. Modzelewski reported: At a meeting of the bureau of the Gdańsk IFC, I realised to my horror that a statute was being prepared of the Independent Self-governing Trade Union of the Coast, i.e. that Gdańsk was supposed to be separate union. Two organisational levels were envisaged: a plant level and a regional level […] We voiced our opposition very loudly […] The Gdańsk Advisers did not fight back […] Yet when talking to activists from the Free Trade Unions of the Coast we discovered that it was iron resistance. The Gwiazdas and Borusewicz did not want to hear of any connection with the rest of the country. The talks were difficult – Lech Kaczyński reported later that Lech Wałęsa claimed that ‘knives were out’. A day later, Jan Olszewski and Jarosław Kaczyński came to Gdańsk. They arrived with an idea – in legal terms formulated by Kaczyński – of a single union that could be unitary, yet its statute was drafted in such a way as to essentially make it a federation, one can read in Wałęsa’s book A Way of Hope. Earlier, Olszewski was convincing Kuroń, who recalled: He took me aside and calmly explained why that idea [of each region applying for registration separately – the author’s comment] was stupid […] If that is not a single organisation, a single statute and a single registration process, the union will simply not come into being.

However, the resistance of the Gdańsk activists and experts (at least some of them) was not fully broken yet. When representatives of the founding committees (commissions) from across the country met in Gdańsk on 17 September 1980 and a representative from Szczecin proposed a single nationwide statute, Lech Wałęsa replied as follows: We are proposing our statute and saying openly that everybody can take it and sign as their own, a regional statute or even an industry one […] And the subject of our registration we will agree later […] Indeed, each region should have a slightly different statute. It would certainly not be right to have a single one. He justified his position saying that work on drafting such a nationwide statute could take ‘at least half a year’. Ultimately, the representatives of Tri-city were convinced. It is true that decisive were reports of colleagues representing places where there was strong resistance of local authorities against setting up new unions, where the activists had not experienced a  won strike battle, felt weaker and feared that they might not survive,  Mazowiecki concluded in 1986. Incidentally, that development was much due to the stance of the lawyer Jan Olszewski, who – on behalf of Independent Self-governing Trade Union Mazovia – suggested the creation of a single all-Poland union, as well as Karol Modzelewski, supporting the notion of a nationwide union not just on behalf of Lower Silesia (Wrocław and Wałbrzych) but claimed it was condoned by Poznań and Warsaw. It was he who came up with the union’s name ‘Solidarność’.

Obviously, the authorities of the Polish People’s Republic saw no interest in the creation of a single nationwide union. Their initial hope was that the agreements concluded would be only of a regional nature and the new independent unions would not emerge across the country. When it turned out that such hopes were unrealistic, they decided to act on the one hand towards restricting their scope and on the other making them industry unions. That was also the direction the Security Service (‘SB’ in Polish) took, counting mainly on miners, more precisely the IFC Jastrzębie headed by Jarosław Sienkiewicz. On the day when the decision was being taken in Gdańsk concerning the creation of a single nationwide union, it was to embrace 91 plants (mainly mines) employing several hundred thousand people. Yet despite the hopes of those in power the activities aimed at making the union set up its own central structure without the regional level were ultimately unsuccessful and their champion Sienkiewicz – inter alia suspected of cooperation with the SB was dismissed from his post (in early 1981).

At the same time, the SB was closely watching both the preparation for a meeting of trade unionists from across the country to be held in Gdańsk on 17 September 1980 and the course of the event. Its secret collaborators managed to record the proceedings, at least their part. It was not a spectacular success, however, as the surviving SB material suggests that the unionists had at their disposal a fuller and almost twice longer transcript. On the other hand, thanks to its agents the SB also knew what was going on behind the scenes of the official meeting. It also had – thanks to the secret collaborator known as Kolega (Jerzy Kozłowski) – a list of the 80 plants that on 15–16 September applied to the IFC in Gdańsk, i.e. those whose representatives were to take part in the meeting. According to that secret agent, as many as around seven hundred workers’ representatives could come to Tri-city – at least until his meeting with the SB lead officer – out of whom not everybody was able to take part in the proceedings given the limited space of the meeting hall. Special attention was given and a separate note devoted by the SB to the contribution made by Olszewski. The note reads that he analysed the resolution made by the Council of State concerning the registration of the new union and presented ‘a range of comments the agent finds disturbing’. He spoke against the replication of the industry structure of the Central Council of Trade Unions – opting for the creation of a single nationwide union as well as a ‘reconciliation commission as a consultative and advisory body while at the same time the retention of strong and independent regional unions’. The opinion of the SB officers that Olszewski was allegedly a ‘promoter of J. Kuroń’s initiatives in that regard’ is probably not worth commenting on.

If the SB – via their secret collaborators – was keeping track of what was going on in the hall of the Ster club, the Military Internal Service (‘WSW’ in Polish) focused on external observation, which – incidentally – did not stop it from reporting – the proceedings were broadcast outside by means of a 12-Watt loudspeaker – on the unionists’ meeting itself. According to staff members of the secret WSW apparatus, i.e. undercover officers, approximately two hundred workers’ representatives ‘from various regions of the country’ were let inside the meeting venue, as well as two priests (one of them a representative of the Episcopate, ‘welcomed by Wałęsa as representing the Polish primate’) and two foreigners – ‘a man and a woman with Asian features’. According to the WSW, they were US journalists allowed inside by way of exception as other journalists (both Polish and foreign) were not supposed to enter. The military security service concluded that the proceedings of more than four hours (with a 30-minute break) were followed outside by around five hundred people. The precise officers noted that the seat of the IFC ‘was decorated with slogans and banners saying “We Welcome you – The Independent Self-governing Trade Union Gdańsk” as well as an inscription made in large blue letters on white canvass reading “Independent Trade Unions” and that the only decoration of the meeting hall was “a state coat of arms left of the presidential table and a cross on the right-hand side”’. Reporting on the proceedings, they wrote, for instance, that the ‘discussants taking the floor stressed solidarity with Gdańsk […] Almost all of them expressed their support for the idea of centralisation and unity of the union movement as well as a uniform statute for all its constituent links.’

The authorities of the Polish People’s Republic had to come to terms with the establishment of a single nationwide Independent Self-governing Trade Union Solidarity. Still, the Home Office continued to collect data on union structures being created, including whether they were keen to operate under the IFC in Gdańsk or to participate ‘in other regional organisations’. In the weeks to come, however, it turned out that also activities aimed at breaking Solidarity were unsuccessful.

To conclude, it is worth recalling that the creation of the Independent Self-governing Trade Union Solidarity did not leave the other allies of the Polish People’s Republic indifferent. For instance, the Hungarians – concerned about the events in Poland – decided during a meeting of the Political Bureau of the Central Committee of the Hungarian Socialist Workers’ Party on 30 September 1980 to preventively discuss the issue of establishing bodies of workers’ self-government. Still, and obviously, they mainly insisted that their Polish comrades quell the counterrevolution.

By Grzegorz Majchrzak, a staff member of the Historical Research Office at the Institute of National Remembrance (IPN). 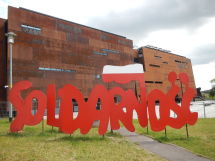