Thanks to support from the Ministry of Culture and National Heritage, the collection of the Polish History Museum is going to be enriched with an item of extraordinary value for Polish material culture, i.e. an Enigma cipher machine constructed by Polish intelligence. The Enigma will be transferred to the PHM by the Piłsudski Institute of London.

In the future, the machine will be on display at the new seat of the Polish History Museum on the grounds of the Warsaw Citadel.

Before the outbreak of the war, several dozen items were most probably made. The device proved highly useful in the work of Polish cryptologists breaking German codes.

In late July 1939, the Poles handed ‘Polish Enigmas’ over to representatives of British and French intelligence, one machine to either. After the war had begun, most Polish encryption machines were destroyed during evacuation, with probably just two ‘Polish Enigmas’ reaching the West. Evacuated staff of the Cipher Bureau and AVA, with the help of French intelligence, managed to recreate technical documentation of the machine and relaunch its production, that time round in France. The assembly was performed by the AVA company.

‘Polish Enigmas’ were used, for instance, at the P.C. Cadix intelligence centre in the south of France up until the arrival of German troops in Vichy France. Later, the equipment was either hidden or evacuated.

The Poles’ knowledge on how the Enigma functioned and their method of breaking its cipher were also useful for the British intelligence service, which was able to read the German messages on a massive scale from 1941 onwards.

The Enigma that has found its way to the PHM’s collection now is just one such machines made after September 1939. Thanks to its transfer to the Polish History Museum, a priceless piece of Polish national heritage has been secured. The relevant agreement was concluded thanks to financial support from the Ministry of Culture and National Heritage.

The Piłsudski Institute of London is an independent non-profit institution founded in 1947 which continues the work of the Institute for Research into Modern Polish History established in Warsaw in 1923-4. Following Marshal Józef Piłsudski’s death in 1935, the name of the organisation was changed to the Piłsudski Institute for Research in Poland’s Modern History. Interrupted in Warsaw in 1939, its operation was resumed in London after the war in the milieu of pro-independence émigrés. The seat of the Institute is home to priceless archival material, publications and museum exhibits related to Poland’s modern history. The unique Enigma machine built using the Polish template and most probably taken from France by Marian Rejewski comes exactly from that collection. Thanks to the fact that the Piłsudski Institute made the original encryption machine available to the public, it has been recently put on public display at the Science Museum in London at the exhibition ‘Top Secret: From Ciphers to Cyber Security’.

The Polish History Museum’s collection already features a German Enigma funded by the US company Prescient. It was made in early 1930 and is one of the first encryption machines received by the German army as its equipment. However, several dozen or maybe even several hundred German Enigmas circulate in the collector circuit.

Thanks to the agreement with the Piłsudski Institute, both the German original and its copy made by Polish intelligence are going to be presented at the new seat of the Polish History Museum. 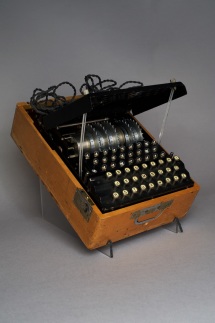 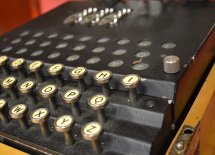 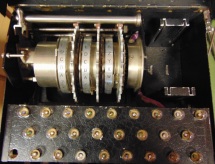 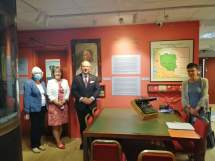 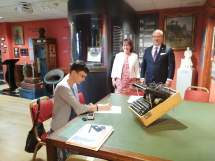