Starting from 3 June, visitors are welcome at the new seat of Maczek Memorial Breda, with part of its exhibition created by the Polish History Museum.

Due to the continuing epidemic threat, the official opening of Maczek Memorial Breda will take place in October marking the anniversary of the city’s liberation by the soldiers of the First Armoured Division.

The modern pavilion with glazing walls stands next to the Polish Military Cemetery at Ettensebaan in Breda, where, among others, Gen. Stanisław Maczek – the commander of the First Armoured Division and the liberator of Breda – is buried. The city was freed on 29 October 1944.

Inside the building, the visitors can use an interactive wall to learn about the fate of individual soldiers fighting under Gen. Maczek’s command. There are separate stands where their memoirs are read out in three languages: Dutch, Polish and English. One can also see the soldiers’ personal effects and elements of military equipment as well as – thanks to an interactive map – become familiar with their combat trail.

According to the plan, an Information and Documentation Centre (a database with detailed information on selected aspects of the history of Breda and its inhabitants) is going to open later this years as a Memorial facility. In the post-war period, as many as around 300 of Breda dwellers were its liberators – Poles who were unable or did not want to return to their fatherland because of communist terror raging there. They found a new home in Breda – they married local women, raised children with them, and found employment there. Many inhabitants of Breda have Polish-sounding surnames still today.

The Memorial has come into being thanks to financial support from the Polish Ministry of Culture and National Heritage, the Polish History Museum in Warsaw, the Breda commune, the province of North Brabant, the Dutch National Foundation for Peace, Freedom and Veteran Care (vfonds) as well as a number of local sponsors.
Because of the coronavirus pandemic, a prior booking of the visit is required. The opening hours are communicated at https://www.maczekmemorial.nl/.

The establishment of the Memorial is part of the delivery of a larger project devoted to General Stanisław Maczek and his soldiers. Co-funded by the Ministry of Culture and National Heritage, the initiative includes a mobile exhibition by the Polish History Museum, to date shown in Poland and the Kingdom of the Netherlands. Also available is an online exhibition titled Black Devils presented on the Google Arts&Culture platform: LINK.

A documentary film has been produced titled Invincible. The Story of General Stanisław Maczek focusing on the fate of the First Armoured Division and its commander, directed by the acknowledged maker of historical pictures Rafał Geremek.

The film can be viewed on the MHP TV YouTube channel:
in Polish:

The project also involves an animated film Marian at War, inspired by drawings of Marian Walentynowicz, a war correspondent with the First Armoured Division, more widely known as the creator of the cartoon character Koziołek Matołek (The Billy-Goat). The animation focuses on his wartime experience.

The entire project is accompanied by a publication, a beautifully illustrated exhibition catalogue featuring a collection of texts about the history of General Maczek and the soldiers serving under his command. 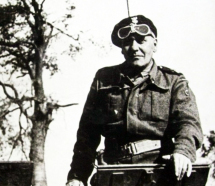