‘Belarus is one of the countries that are heirs to the Union of Lublin, which is why I am glad that Minsk is the first city outside of Poland where this document is shown,’ the Polish History Museum director Robert Kostro said during the opening of the exhibition on Wednesday.

Paweł Sapoćka, director of the National Historical Museum in Minsk emphasised the fact that the possibility to show the Act in the Belarussian was capital of great importance. ‘It is a historic event in a jubilee year but equally an opportunity for our experts to become familiar with the great work of Polish conservators,’ he said.
Intended to be one of the key exhibits presented in the new seat of the Polish History Museum, the replica of the Union of Lublin Act was being prepared for almost two years. Its creation by two copyists is documented in a film made by the Museum, also shown in Minsk. The document comprises 20,000 words in 61 lines.
‘That was extraordinarily hard meticulous work. Over two years, a pair of copyists were recreating the document, using – as much as it was possible – tools, materials and technologies similar to those applied in the original,’ says PHM spokesperson Marek Stremecki.

Director Kostro stressed that the Union of Lublin Act signed 450 years ago was a fundamental document for the countries it bonded but also their contemporary heirs including Belarus.
‘Just like Lithuanians, Belarussians have the right to feel heirs to Lithuania, or the Grand Duchy of Lithuania, as part of the Commonwealth,’ Mr Kostro said. He added that although obvious for historians, it was not common knowledge that ‘historically speaking, Lithuania included also Belarus’ and the borders delineated by the Lublin Act de facto defined the borders of contemporary Belarus as well as influenced the shaping of Belarussian identity.

‘That is why we see a great role, also for our museum, of popularising that knowledge, both in Poland and abroad’ he added.

Director Kostro further recalled that the Union of Lublin was sometimes referred to as a historical model for the European Union. ‘It also offers some opportunity to communicate it more easily to the outside world because in Poland, Lithuania or Belarus the Union may be a known theme but the comparison with the EU expands the imagination of those less interested,’ Mr Kostro said.

His assessment was that the uniqueness of the Polish-Lithuanian Commonwealth consisted in the fact that it had been ‘a voluntary association of countries rather than one of many short-lived dynastic events and it had created in a peaceful manner a permanent system where various nations of different religions and traditions were able to function together.’

‘It was a civic state, obviously not in the broad meaning of today yet giving its citizens, that is the szlachta (nobility) of varying ranks, the possibility to take part in assemblies and choose the monarch as well as have some impact on politics,’ he emphasised.

The Union of Lublin was a real union entered into by the Kingdom of Poland and the Grand Duchy of Lithuania in 1569. It initiated the Polish-Lithuanian Commonwealth, which lasted for more than two centuries until the Partitions in the late 18th century.

The original Union of Lublin Act is currently kept at the Central Archives of Historical Records in Warsaw and is not available to the public due to specific requirements related to the conditions of its presentation.

In 2018, the Union of Lublin was entered into UNESCO’s Memory of the World International Register on the joint request of five countries: Poland, Lithuania, Ukraine, Belarus and Latvia.

The opening of the exhibition, organised on the initiative of the Polish Institute in Minsk, was attended by diplomats working in Minsk, local Poles as well as members of Belorussian intelligentsia and cultural milieus.

The exhibition organisers are the Polish Institute in Minsk, marking its 25th jubilee season with the event, as well as the Polish History Museum in Warsaw and the National Historical
Museum in Minsk.

By Justyna Prus, after PAP/dzieje.pl 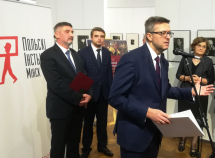 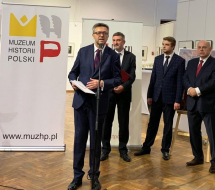 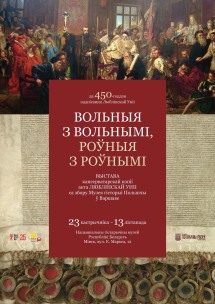