The author has read Polish treaties from the 17th and the early 18th centuries devoted to the construction of residences, management and the art of gardening as material inspiring her analysis of the collecting culture in Old Poland. Importantly, collections were present not just inside manor houses but also in their gardens, which were exhibition venues and at the same time collections in their own right, given the selection of flora and fauna.

Initially, objects used to be compiled in separate buildings: treasuries and granaries whose function was to store rather than order and exhibit. A change of approach to collections meant moving them to manor buildings. Treaties on architecture are a source of knowledge on spaces created or adapted for that purpose: private offices and galleries, chapels and, last but not least, home museums. Collecting practices have been showcased using the examples of the Kazanowski Palace in Warsaw, the Vasa manor in Nieporęt, the castle in Żółkiew and the Krzyżtopór Palace in Ujazd.

The analysis of the treaties suggests a structural union of the household and the garden, subjecting them to analogous rules and interlinkages between the residence and the landscape. The author pays much attention to the concepts of baroque gardens and specific projects in the context of the notion of collecting. She shows mutual relations of gardens and private offices as spaces to collect and present valuable objects. She also traces the vegetative process of growing and withering as an introduction to perpetuation and retention in memory. In addition, the book discusses illusionism and theatralisation related to exhibition practices used in outdoor contexts. A separate chapter is devoted to botanical gardens, or their creators: botanists and collectors in one.

The wide-ranging analysis of the notion of collection and the collector ethos makes Aleksandra Jakóbczyk-Gola attempt to define the phenomenon of modern Polish collecting. Compared with other countries, it stood apart in terms of such aspects as its negligible interest in ancient monuments. The motifs of nativeness, old customs and tradition recur throughout the book. Using multiple examples, the author shows that in Old Poland the specificity and value of collections were largely determined by the link between nature and culture as well as the combination of decorativeness and utilitarianism. 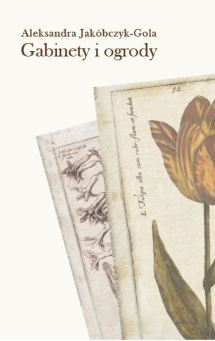