With increasing frequency the question about conditions of life, biological conditioning and appearance of our ancestors crosses among fields of analysis in specific areas of knowledge. The book Crafting the Physical Being on Polish Lands: Past and Present is the result of one such interdisciplinary collaboration of academics, among them historians, anthropologists (physical), evolutionists, archeologists and demographics specialists.

The collection opens with an article related to changes in anatomy in the population of Poland, its reasons and possibilities of treating them as a measure of economic development and life conditions in our lands. The following texts present the biological standard of life of an urban population, in the village and different groups from the Jewish population. There is a description of tragic aftereffects of the First World War for villagers, robbed by different armies and malnourished. But also the results of conscription records from Warsaw, indicating progress in life level in that city in the final quarter of the 19th century and beginning of the 20th. The second part of the collection is dedicated to the use of anthropological techniques in historical and contemporary research. Questions like the indicator of physiological stress on the skeleton, relations between diet and social status in the early middle age population in Poland, which are possible to measure on the basis of isotopes of a medulla collagen or relations between the evolution of the brain and psychometric capability and physique built on the basis of dietary habits. From articles published in this part, we can learn, for example, what exemplifies increased decay discovered among medieval townsman buried in St. Elisabeth church in Wrocław, or why in the remains of Cistercians fossilized connective tissues can be seen, or what in our diet influences reflexes.

One value aspect of this publication is the presence of multiple angles and presentations of research tools. The results of works crossing borders between historical approaches help to better understand the mechanisms of adaptation of man to his environment – in the past, as well as in the present.

The publication is the fruition of the academic conference “Crafting the Physical Being on Polish Lands: Past and Present,” which was held on 19 March 2016 at the Cardinal Stefan Wyszyński University (UKSW) in Warsaw. The conference was organized by the Department of Biology and Environment at UKSW and the Polish History Museum.

Napoleon Wolański: Changes in the anatomy of the population of Poland, their reasons and possibilities to use them as measure of economic growth and life conditions

Bartosz Ogórek: Unobvious results of the First World War: the growth of Kraków students in 1919–1933

Alicja Budnik: Obesity in the history

Michał Kopczyński: The growth of the body and BMI in cities and villages at the crux of 19th and 20th centuries: the case of Warsaw

Bartosz Gralicki: Biological standards of Jewish life in Vitebsk at the beginning of the 20th century, in light of anthropometric measurements

PART II: THE USE OF ANTROPOLOGIST'S TECHNIQUES IN RESEARCH ABOUT HISTORY AND CONTEMPORANEITY

Maciej Hanneberg: Study of physical anatomy on the basis of photographic and film materials

Barbara Kwiatkowska: The indicators of physiological stress studied in skeletons

Anna Siniarska: Evolution of brain and psycho-motoric fitness and anatomy of the body on the basis of dietary research 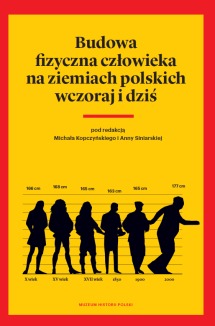