Thanks to the long-standing efforts of the Ministry of Culture and National Heritage and the personal involvement of the Deputy Prime Minister/Minister of Culture and National Heritage Prof. Piotr Gliński, a series of seven paintings by members of St Luke’s Brotherhood and four tapestries by Mieczysław Szymański have returned to Poland after 83 years. The works have become part of the collection of the Polish History Museum in Warsaw.

The paintings, which were presented in the Polish Pavilion at the New York World Exposition from May 1939 to the end of 1940, depict the most important events in the history of Poland, showing the country’s contribution to the development of Western civilisation, including its relations with its neighbours, as well as its traditions of tolerance and constitutionalism.

Opened by US President Franklin Delano Roosevelt on 30 April 1939, the New York World’s Fair was to present a vision of social progress and technological development under the slogan ‘The World of Tomorrow’. The outbreak of the Second World War made it mark the finale of the interwar period. Due to the ongoing war in Europe, it was decided that after the end of the exhibition the works from the Polish Pavilion were to be stored in the USA. Once the war ended, the paintings and four tapestries by Mieczysław Szymański were placed at the disposal of Stefan Ropp, Commissioner General of the Polish Pavilion, who eventually handed the whole collection over to the care of the American college Le Moyne College in Syracuse.

For many years, the idea of returning the paintings to Poland had been present in public debate and in the media. The question of the restitution of these works was revisited on many occasions, with particular efforts in this regard made by the late Jacek Miler, Director of the Department of Cultural Heritage Abroad and Wartime Losses at the Ministry of Culture and National Heritage, as well as Piotr Obst representing the Polish community in the US. Yet it was only the endeavours by Prof. Piotr Gliński, Minister of Culture and National Heritage, and the Department of Restitution of Cultural Property reporting to him, that led to a successful end. The paintings of St Luke’s brothers and the works of Mieczysław Szymański have now become part of the collection of the Polish History Museum as exhibits in its permanent exhibition.

History of the collection from Le Moyne College

The Polish Pavilion for the 1939 New York World’s Fair was created at a dizzying pace - in less than a year and a half. The exhibition, comprising more than 11,000 objects, was to manifest pride in the cultural and economic achievements of the Polish Second Republic, but also to recall the most important events in Polish history. One of the most interesting elements of the programme of the Hall of Honour in the Polish Pavilion was a series of seven paintings representing Poland’s history of many centuries, concentrating in their ideological message on showing the country’s contribution to the development of Western civilisation. This demanding and timely commission was entrusted by the Polish Government in 1938 to a group of eleven artists, students of the School of Fine Arts in Warsaw and members of St Luke’s Brotherhood, among whom were: Bolesław Cybis, Bernard Frydrysiak, Jan Gotard, Aleksander Jędrzejewski, Eliasz Kanarek, Jeremi Kubicki, Antoni Michalak, Stefan Płużański, Janusz Podoski, and Jan Zamoyski. The painters worked under the direction of Prof. Tadeusz Pruszkowski in his studio in Kazimierz upon Vistula. The uniqueness of the project stems from the fact that each painting, having eleven co-authors, is a collective artistic work.

The seven paintings, each measuring 120 x 200 cm, depict momentous events in Polish history: Bolesław the Brave’s meeting of with Otto III at the tomb of St Adalbert (1000), the adoption of Christianity by Lithuania (1386), the granting of the Jedlnia-Krakow privilege (1430), the Union of Lublin (1569), the adoption of the Warsaw Confederation for Religious Freedom (1573), the Battle of Vienna (1683), and the Constitution of 3 May (1791). The programme of the series was prepared by a committee of scholars headed by Prof. Oskar Halecki. Under his aegis, a thorough search was also carried out, as a result of which the historians helped the painters to recreate the colours and types of fabrics used in the costumes and interiors of past eras. Thanks to the many hours of work each day, the exacting deadline was met. After six months, on 7 December 1938, the results were presented to the public at the headquarters of the Art Propaganda Institute in Warsaw.

The decoration of the Hall of Honour in the Polish Pavilion was complemented by four tapestries entitled John III Sobieski, designed by Mieczysław Szymański and made under the direction of Maria Łomnicka-Bujakowa by a team of embroiderers from the Inicjatywa cooperative in Warsaw.

The German invasion of September 1939 meant that the Polish Pavilion was deprived of its sources of funding and the Commissioner General of the Polish exhibition Prof. Stefan Ropp sold off part of the furnishings. Most objects became part of the collection of the Polish Museum in Chicago, while the collection of seven paintings by St Luke’s brothers and four tapestries designed by Szymański was deposited at the Jesuit Le Moyne College in Syracuse, New York, where from 1958 onwards it was presented in the local library, initially in Grewen Hall and as of 1981 at the Noreen Reale Falcone Library.

Who were St Luke’s brothers?

St Luke’s Brotherhood was an artistic group founded in 1925 focused on traditional figurative painting following in the footsteps of medieval painters’ guilds. It used traditional techniques, referring to Dutch and Italian painting of the 16th-17th centuries. It was founded by Prof. Tadeusz Pruszkowski and his students, who created mainly historical, genre and biblical scenes. They stood in opposition to the avant-garde trends in art prevailing at that time. Members of the St Luke’s Brotherhood included: Bolesław Cybis, Jan Gotard, Aleksander Jędrzejewski, Eliasz Kanarek, Edward Kokoszko, Antoni Michalak, Jan Podoski, Mieczysław Schulz, Czesław Wdowiszewski, Jan Wydra, and Jan Zamoyski. They were later joined by Bernard Frydrysiak, Jeremi Kubicki and Stefan Płużański.

The works which found their way to Le Moyne College have no counterpart in domestic collections in terms of coherent compositional and ideological programme. They also constitute a valuable record of the creative practice of one of the most interesting Polish artistic groups of the interwar period. The paintings by St Luke’s brothers are also an invaluable testimony to the involvement of the artistic and scientific community in the promotion of Poland during the Second Republic, supported by the generous patronage of the state authorities.

Mieczysław Szymański, a Polish painter and textile designer born at the beginning of the 20th century was trained by Prof. Tadeusz Pruszkowski. He became famous for a large tapestry made for the World’s Fair in Paris in 1937, for which he received the Grand Prix distinction. Interestingly, it was this very fabric that was later cut into four separate scenes (The Allegory of Victory, The King with Emperor Leopold after the Victorious Battle of Vienna, The King with Marie Casimire Louise de La Grange d’Arquien (Marysieńka) Surrounded by Court Ladies, and The Angel) and placed two years later in the Polish Pavilion at the World’s Fair in New York.

The series of paintings by St Luke’s Brotherhood will be a valuable addition to the collection of the Polish History Museum, which previously included over 100 objects of applied and folk art from the Polish Pavilion donated by Maria Starczewska-Lambasa. 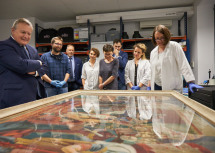 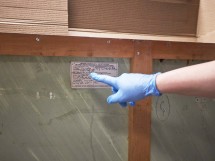 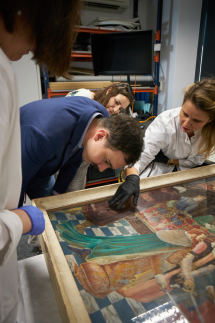