The exhibition, of which the Polish History Museum is one of the partners, presents on a dozen or so panels the war waged since February by Russia against Ukraine: the incredible atrocities committed by Russian soldiers in the occupied territories, the heroism of the defenders and the origins of the onslaught. It shows how Putin’s authoritarian regime has gradually destroyed democracy and freedom of speech in Russia and pursued a policy of rebuilding an empire along the lines of the Soviet Union.

‘We have witnesses’ duty, a duty to bear witness to what is happening in Ukraine, and that is war crimes. This exhibition depicts that war. [...] Ukraine is fighting for all of us, for Poland, for Europe, for the whole world. We must stand with Ukraine today. Let us remember that this war is ongoing. The worst thing is habit, the worst thing is indifference, that this war is progressing slowly - no, not slowly - every day, people are being killed, innocent people. And we must remember this, we must talk about it - and this exhibition is there to talk about it,’ said Deputy Prime Minister/Minister of Culture and National Heritage Piotr Gliński during the official inauguration of the exhibition.

The exhibition was created by the Ukrainian Institute of National Remembrance, commissioned by the Ministry of Culture and Information Policy of Ukraine. The promoters emphasise that they want the truth about the crimes against humanity committed by Russian soldiers in Ukraine to reach Europeans. They also want to draw attention to Russian propaganda myths spread in the Western media, such as the one about the ‘single nation’ that Russians, Ukrainians and Belarusians allegedly form. ‘Europeans have a duty to see the true face of Russia, to become aware of the dangers that threaten all of humanity and to help Ukraine protect both itself and Europe,’ the exhibition promoters stress.

‘For us, this exhibition is an unusual project for three reasons. Firstly, it is because we are not the authors of this exhibition. The second thing is that this display deals with contemporary themes. This exhibition shows what is happening before our eyes today. And the third reason is that it is unique because I would have preferred not to have done this exhibition and for us not to be in the situation in which we are today. This exhibition is motivated by the feeling that something has to be done. The sense that we cannot helplessly watch while innocent people are being killed across our eastern border. It is our contribution to support the efforts of our brotherly Ukrainian nation to defend its independence, but also to defend our freedom, and indirectly our own independence,’ added Robert Kostro, Director of the Polish History Museum.

‘It is hard to even look at the photos and footage from Ukraine, but we have no right not to talk about it. We thank everyone who helps us, who supports us, so that our voice of the Ukrainian people can be heard throughout the world. We are grateful to the Polish people that we have not been left alone in this war. We

feel supported and that we are fighting together, and we thank you for that,’ noted Yana Krivobok, First Secretary of the Embassy of Ukraine in the Republic of Poland.

‘We are very happy that this exhibition will be shown in other locations in Europe and we are aware that by inviting you to this place we want to be witnesses, we want to show the truth, which is now necessary for everyone to imagine and visualise. We cannot run away from what has been presented here,’ said Deputy Director of the Royal Baths Museum Marianna Otmianowska.

The exhibition has been prepared in Ukrainian, Polish, Lithuanian, German and English language versions.

It is presented in several European cities, on days when Europe celebrates the victory over the Nazi German Third Reich:

· 9 May: Warsaw and Vilnius

· 16 May: Berlin, Bamberg and Frankfurt

Shows are also planned in Brussels and other cities.

Presentation of the exhibition in Warsaw:

Promoter of the exhibition:

Ukrainian Institute of National Remembrance, commissioned by the Ministry of Culture and Information Policy of Ukraine

Ukraine: State Agency of Ukraine for Art and Artistic Education, Crisis Response Staff for the Protection of Cultural Heritage 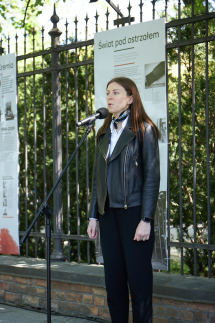