On 26 February (Friday), gifts from the Białous family were festively transferred to the Polish History Museum at its temporary seat in Warsaw. A unique uniform as well as orders and keepsakes related to Captain Ryszard Białous (nom de guerre Jerzy), the commander of the legendary Home Army battalion Zośka are now part of the permanent exhibition of the Polish History Museum in the course of development.

The event attendees included Deputy President of the Council of Ministers, Minister of Culture, National Heritage and Sport Prof. Piotr Gliński; Director of the Polish History Museum Robert Kostro; Director of the Central Archives of Modern Records Mariusz Olczak, while Jakub Nowakowski (nom de guerre Tomek) a rifleman in Battalion Zośka was a guest of honour. Ryszard Białous’ Argentina-based sons Jan and Jerzy as well as Polish Ambassador to Argentina Aleksandra Piątkowska also took part in the meeting albeit remotely.

During the ceremony, Prof. Piotr Gliński expressed his hope that the Polish History Museum would ‘carry on the memory and that we will be able to use the institution to pass through such artefacts the values that are constitutive for the Polish community on to successive generations’. ‘What matters the most today is to remember and know where we have come from and why we are the way we are. And exactly these objects speak about it,’ stressed the head of the Ministry of Culture, National Heritage and Sport. ‘It is moving that memory of that generation, those people and values – extraordinarily important as these values are important – will survive institutionalised at the Polish History Museum,’ Deputy PM Gliński concluded.

‘The objects we have received are invaluable as keepsakes bestowed by the legendary commander of Battalion Zośka Ryszard Białous. They also remind us of the fate of the generation of Columbuses, young people unable to use their talents working for Poland in times of peace who had to make the sacrifice of their blood for the country. Many of them perished, while others, like Captain Jerzy, remained abroad after the war,’ highlighted Director of the Polish History Museum Robert Kostro.

Polish Ambassador to Argentina Aleksandra Piątkowska underlined the fact that while in exile Ryszard Białous never forgot about Poland and was always active for the benefit of his home country and the Poles.

Speaking on his own and his brother’s behalf, Jan Białous, a son of the commander of Battalion Zośka, expressed joy at being able to transfer the family memorabilia related to his father to the Museum: ‘We are greatly proud of it.’

The charismatic commander of Battalion Zośka, with which he covered its entire insurgent combat trail, Ryszard Białous was a prisoner of war in German camps, a three-time recipient of the Cross of Valour, a cavalier of the War Order Virtuti Militari, and after the war he was forced to live in exile, residing in Argentina since 1948.

Those recalling the legendary Home Army commander during the event included the rifleman of Battalion Zośka Jakub Nowakowski (Tomek), one of the eleven surviving soldiers serving under Capt. Białous. The veteran looked back at the entire life of his commander, including such facts as distinguishing himself during the Warsaw Rising by liberating the German camp KL Warschau known as Gęsiówka, as well as the spectacular operations of breaking to Central Warsaw – first from the Old Town, and finally from Czerniaków.

The memorial items transferred by the sons of Captain Białous include a Scouting Cross, a War Order Virtuti Militari, a service dress (uniform) of the time he served in the Polish Armed Forces as well as a relief with Our Lady of the Gate of Dawn.

The objects related to Jerzy’s clandestine service are going to be exhibited at the future seat of the Polish History Museum – now constructed at the Warsaw Citadel – in a gallery titled Fighting Poland devoted to the country’s history during the Second World War. Ryszard Białous’ Scouting Cross and War Order Virtuti Militari will feature in the section on the Warsaw Rising. Poland’s highest military distinction, the Virtuti Militari Order was to mark his courage during fights at the time of the Rising. He led the Radosław Group (the legendary Battalion Zośka and Brigade Broda 53) in heavy fights in the quarters of Wola, Old Town, Czerniaków or during a brave operation breaking through to Central Warsaw. His Scouting Cross is linked to Jerzy’s service in the Gray Ranks. That badge accompanied him in his clandestine activities as well as the fighting during the Rising.
Ryszard Białous will also feature in the gallery Poles and Communism focusing on the period of the Polish People’s Republic. It will showcase objects related to Jerzy’s service in the Polish Armed Forces in the West as well as ones illustrating the daily life of Polish émigrés.

Captain Ryszard Białous’ service dress comes from the time of his service in the 1st Polish Independent Parachute Brigade Group, stationed in the Polish occupation zone in the territory of defeated Germany. Białous found himself there after leaving the Oflag where he was incarcerated following the Warsaw Rising.
The relief with an image of Our Lady of the Gate of Dawn and an inscription ‘SO BY MIRACLE THOU WILT RETURN US TO THE BOSOM OF OUR COUNTRY’ was made by Ryszard Białous in 1949, soon after his arrival in Argentina, of wood of the rauli – extremely hard and similar to Polish oakwood in touch. Jan Białous received it from his father when leaving in 1951 to a primary school in Tucumán Province more than 2,300 km away from his home.

The wartime memorabilia related to Ryszard Białous are going to be shown as an aspect of the narrative about the daily life of Polish émigrés. The exhibition intends to explicitly highlight the wartime origin of living in exile, and both the uniform from the time of his service in the Polish Armed Forces and the relief showing Our Lady of the Gate of Dawn fit well in here. The invaluable artefacts have been transferred to the Museum thanks to the agency of the Central Archives of Modern Records. 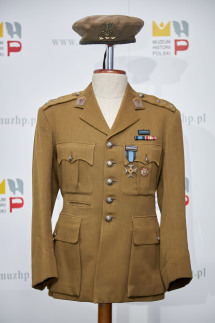 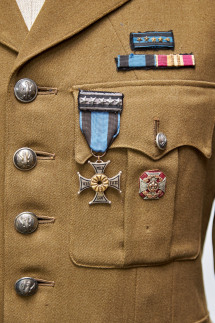 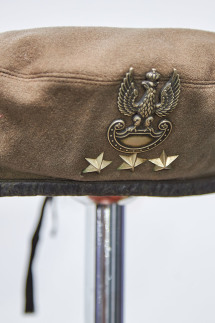