Krakowskie Przedmieście Street next to Zamkowy Square in Warsaw is now a venue for a unique open-air exhibition prepared by the Polish History Museum in cooperation with the General Maczek Museum in the Dutch city of Breda. After the Polish capital, where it can be viewed until 28 September, the trilingual exhibition (presented in Polish, English and Dutch) will travel exactly to Breda, liberated by the soldiers of General Stanisław Maczek’s First Armoured Division.

The festive opening of the exhibition was attended by the secretary of state at the Chancellery of the Prime Minister Piotr Naimski, undersecretary of state at the Ministry of Culture and National Heritage Magdalena Gawin, director of the Polish History Museum Robert Kostro, as well as closest relatives of the General – a Cavalier of the Order of the White Eagle – his son, the UK-based chemistry professor Andrzej Maczek and his granddaughter Karolina Maczek-Skillen. Also present were ambassadors of the Netherlands, Belgium and Canada to Poland.

Director of the Polish History Museum Robert Kostro indicated the three key reasons why General Stanisław Maczek should be remembered. ‘This officer was one of the creators of the modern Polish armed forces. Throughout his career in the military, he sought to set up a mobile unit of considerable capacity. Therefore, in this exhibition he is shown as an eminent general. He was the only Polish commander of that rank during the Second World War who never lost a single battle. General Maczek and his soldiers from the First Armoured Division are symbols of Poland’s fate in the Second World War,’ director Kostro underlined. ‘First, he was on his way to France via Hungary, and then he reached Great Britain and fought for the freedom of his own country and the western allies. Yet just like thousands of other Poles, that great commander could not return to communist Poland after the war. He was stripped of Polish citizenship and could face repressions. For many years, he had to earn a living in Scotland working hard, and was not appreciated by his new homeland. It was only after the fall of communism that he was recognised,’ Robert Kostro said.

The director announced that the Polish History Museum was involved in a collaborative effort of a documentary film about General Maczek, soon to be finished, and that an animated one was on the way devoted to the great commander and featuring drawings by Marian Walentynowicz.

In his letter to the exhibition guests and organisers read out by the secretary of state at the Chancellery of the Prime Minister Piotr Naimski, Prime Minister Mateusz Morawiecki recalled Stanisław Maczek’s own words and unique creed: ‘The Polish soldier fights for the freedom of all nations and countries yet dies only for Poland.’
Deputy minister Magdalena Gawin read out a letter from the Deputy PM and Minister of Culture and National Heritage Piotr Gliński, who expressed his thanks for staging the exhibition about a great Polish commander and stressed the latter’s unwavering love of his fatherland.

Homage to war veterans, further celebrations in the pipeline

‘I am paying my respects to the war veterans present here,’ said Raphael Varga van Kibed, Chargé d’Affaires of the Embassy of the Kingdom of the Netherlands. Welcoming the participants of the exhibition opening, he also recalled that the Dutch remember the Polish soldiers with gratitude and that for centuries both countries had been enjoying good relations. ‘It is no coincidence that five years ago the King of the Netherlands and his spouse chose Poland as their first foreign trip destination and visited Warsaw, where they went to see General Maczek’s monument,’ he stressed.

Speaking in Polish, Prof. Andrzej Maczek expressed his thanks for the invitation as well as the hope that – apart from the interesting exhibition – his father would be the focus of successive and more comprehensive exhibitions in Poland, and maybe a museum devoted to him. ‘Polish authorities have failed to even grant my father an old-age pension for his military service,’ he said with regret, ‘while his own history and that of his soldiers are our national treasure,’ Professor Maczek continued.

The opening of the exhibition in the year when we commemorate the 80th anniversary of the outbreak of the Second World War serves also as a reminder that September of 1939 meant more than just the failure of Poland’s defensive war. The Tenth Cavalry Brigade under the command of the then Colonel Maczek managed to shield the Kraków Army against the German troops and was successful in combatting the enemy. Regrettably, it had to withdraw to Hungary as the entire Polish front collapsed. Yet its soldiers were finding their way to France and England, to fight on.

Thanks to the photographs, fragments of wartime chronicles and recorded memories of the soldiers, including the very commander of the ‘Black Devils’ General Maczek, one can become familiar with not just the victorious battles involving the First Armoured Division but also the daily life on the front and the post-war fate of the Polish heroes. During the war, they were called Black Devils due to the colour of the berets and leather jackets they wore but above all because of their reckless courage. Stanisław Maczek’s soldiers were the only large unit of the Polish Army retaining its combat capacity in 1939.

When the legendary commander General Stanisław Maczek entered  Breda at the helm of his troops on 29 October 1944, the city was euphoric and banners saying ‘Thank you, the Poles’ appeared on its streets. Dutch women would bring flowers to the soldiers. No wonder that some of them settled in the Netherlands.
In 1981, a museum devoted to Stanisław Maczek was set up in Breda. This year, in turn, special celebrations are on the way to commemorate those events on the occasion of the 75th anniversary of the city’s liberation. And it is to those celebrations that the exhibition prepared jointly with the Polish History Museum curated by Wojciech Kalwat has been ‘invited’.

He never returned to Poland, yet the undefeated commander of the Black Devils is also remembered by the Poles. The communists stripped him of Polish citizenship. Although he lived to be 102 years old and to see free Poland, he was unable to come to his home country due to old age and poor health. He died in Scotland in 1994 and was buried among his beloved soldiers at the military cemetery of Breda.
Unappreciated for years, now – also thanks to the excellent location of the exhibition – the general will be of interest to tourists from many countries strolling along Krakowskie Przedmieście. In the words of the exhibition curator quoting Henryk Kątny, a soldier of the First Armoured Division: ‘General Maczek was not demanding. He was expecting. We knew it and tried to deliver.’ From now on, the general can also expect an even greater interest in his person.

The project has been financially supported by the Ministry of Culture and National Heritage.

Photography by the PHM / Mariusz Bodnar 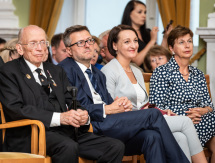 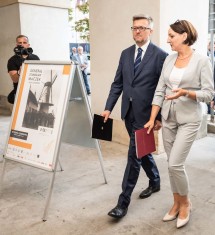 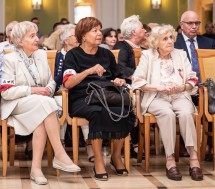 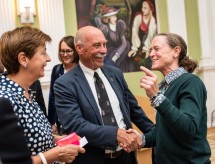