Leaders at the highest level of the Polish Government have played a prominent role in the founding of the Museum and the selection of its permanent home on the storied grounds of the Warsaw Citadel. The PHM was founded on 2 May 2006. Soon after its founding, the Museum initiated a site selection process to identify a permanent home for its exhibitions, for its educational and research programs and for promotional activities to bolster Poland’s information about its historical heritage abroad.

In 2009 , the Polish History Museum announced an international architectural competition regarding the location of the Museum over the Łazienki Route near the Ujazdowski Castle. The winner was the Paczowski et Fritsch bureau of Luxembourg.

The decision to finance the construction was halted in 2010, and the Museum was removed from the list of priority projects to be realized from European funds.

In the spring of 2015, negotiations began regarding the new seat of the Museum in the Warsaw Citadel. On 29 January 2016, in the presence of the Minister of Culture and National Heritage, Prof. Piotr Gliński, the contract was signed regarding the design of the building of the Polish History Museum. The signatories were, PHM Director, Robert Kostro, and the president of the architectural bureau, WXCA, Szczepan Wroński. Less than a year later, visualization of the new permanent seat of the PHM was presented. On 6 October 2017, tender was announced regarding the construction work of the Museum. On 15 May 2018 it was announced that the winner was Budimex.

The Museum will be located on the grounds of the Warsaw Citadel (‘Independence Park’). The Museum will neighbor with the X Pavilion Museum, the Katyń Museum, and the Polish Army Museum.

The building was designed by the WXCA architects, who won the Polish Army Museum Completion (at Warsaw Citadel) in 2009. The design was adjusted to the needs of the Polish History Museum.

The are of over 30 hectares will have a recreation area for the residents. A two-level parking lot for the employees and the visitors has been designed as well; there are also parking places for buses. The new museums occupy the area around the central square: on the northern and the southern side there are two pavilions of the Polish Army Museum, while in the center the Polish History Museum will be located. The area of the PHM will be around 44,000 square meters, including 8,000 sq. m for storerooms and conservation workshops of the Polish Army Museum.

Profile of PHM’s Home at the Citadel

The architecture of the PHM building is a purposely constructed narration, written in stone and in contemporary form, it is a narration of the layers of history building up one on the other, of discovery, of uncovering the various meanings of the past, of openness and freedom ? the Museum’s motto. In its visual expression, the stone solid refers to the various consecutive layers that constitute history. In the consecutive layers, as if in an archaeological cross-section we do notice the traces of human action, of historical events, of different eras. The individual form (‘personality’) of each slab, their formation, composition, ornamental transformations make up an intricate tissue that expresses both the individual and the collective dimension of history, the overlapping of the natural and cultural processes, the formation and the eradication of memory. This recording of time in history continues.

The spatial openings of the ‘temporal lump’ on the exhibition level and at the ground level, are continued as a network of interconnected spaces within; they materialize the idea of openness, of the Museums friendliness, the process of discovery, the multidimensional view of history, the freedom of choice of the path of cognition, of the formation of one’s own narration. The glass openings in the building's facades will also serve as a way to communicate in the neighborhood of the current activities that fill the different parts of the Museum. One of the most important instrument of forming the atmosphere within the Museum is light, both the natural light that pours in by the openings in the building's surface and the artificial lighting inside.

The Polish History Museum will be one of the most advanced currently under construction in Poland and in Europe; we expect at least 500,000 visitors a year. The Museum will also become a place of a multidimensional contact with Polish history, of reflection, learning, contact with culture, and a center of social life. Apart from the exhibition spaces, the Museum will also offer rooms for education, workshops, auditoriums, screening, catering, conservation workshops and museum storerooms.

Priorities for the PHM

The permanent exhibition of the Polish History Museum will be one of the largest exhibition spaces in Poland at 7,000 square meters in size. It is being developed by PHM’s own historians in collaboration with external historians, art historians and experts from leading universities and the Academy of Polish Science. The exhibition will have a narrative character, telling over 1,000 years of Polish history with the use of original artifacts, set design and multimedia that offer visitors a way to vividly experience the past.

The artistic team of the WWAA/Platige Image Consortium, which won PHM’s international design competition, will be a primary source for content development.  WWAA efforts will be led by the acclaimed set designer, Boris Kudlicka.

The exhibition will tell the story of Poland by emphasizing three major themes: Freedom, Identity and Civilizational Transformations.

Freedom is defined as independence in political and civil spaces and as personal freedom. This theme stands out in Polish history. Broadly treated, this topic makes it possible to present the unique and advanced nature of the ancient Republic’s political system, as well as Poland’s determined struggles for freedom and independence in 19th and 20th centuries.

The theme of identity encourages visitors to learn how the Polish nation was formed; the unusual multi-ethnic, multi-religious and tolerant nature of its ancient Republic; how the Poles maintained their identity throughout 123 years of partitions which rendered the nation stateless; and the dramatic challenges of maintaining identity during the German occupation and its aftermath when borders shifted and social and economic structures changed dramatically under communism.

PHM will invite visitors on a journey across one thousand years to witness more than a dozen “dominants” – powerful and history-molding forces – that occurred.  Among these dominants are: the royal court of the Jagiellonian dynasty, the panorama of the royal electoral square, the city at the dawn of the Industrial Revolution, the Battle of Warsaw in 1920, an underground meeting spot during the Second World War and the Gdańsk Shipyard during the strike in August 1980.

Because the PHM exhibition will stress original artifacts, the Museum is acquiring its own collections and soliciting significant artifacts from donors. To tell Poland’s vast, multilayered story requires the following kinds of artifacts:

In the picture: The structure of the auditorium that can seat about 600 people. 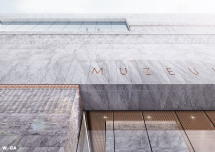 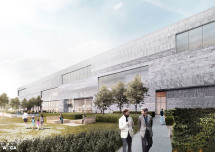 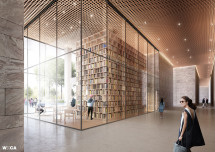 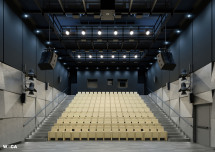 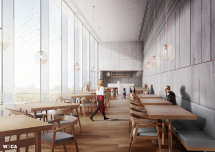